No matter where I go, birds are always on the back of my mind.  This past winter my wife Sue and I, found a dirt cheap trip to Cuba and decide we’d had enough of winter.  Off we went direct from Ottawa to Holguin, a popular destination in Cuba.  This was a one week, all-inclusive for under $600 bucks with the flight, good find Sue.  After we landed, a bus took us to Club Amigo on the coast town of Guardalavaca, about an hour ride.   The hotel guests were a mixture of people from Quebec, Maritimes and Europe..nice place,  decent food (anyone whose been to Cuba knows what I mean).

We ate, swam, lounged and had many a margeritas that week, just soaking up the sun, with snow a distant memory.

I didn’t really think there would be many birds but I began to notice warblers, Yellow’s, Palms, Cape May’s and Yellow-throated on the grounds, so out came the camera.  Of course as soon as it did, the birds seemed to disappear.  One particularly hot day Sue was on the beach and as always I was in the shade…LOL..I noticed a small warbler about 4 feet away watching me…

This was and still is my best photo of a Yellow-throated Warbler, we shared this little bit of shade for about 10 minutes enjoying each others company, then camera and beer in hand, I left…my kind of birding, only thing missing was a cigar but thats another story.

There were lizards, gecko’s, dragonfiles…all types of nature to photograph…

I was resigned to the fact, that was about it for birds, no real way to get around..so I decided to rent a bicycle, yup a bicycle and ride the 2 miles to local animal park and see what it had to offer.  I was glad to get off that bike.  First bike I’ve ever been on, that stopped if you didn’t pedal, even going downhill.  This little park did offer some surprises a few flamingos, black-necked stilt and a few white-cheeked pintails, which according to the caretaker were all wild birds who just liked the area. 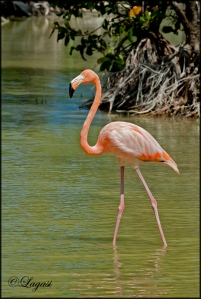 Very decent place to photograph, I could go anywhere, although mud was a problem..I still got some lovely images.  I had seen wild Florida Flamingos in the Everglades but they were only viewed with spotting scopes, it was nice to get close… 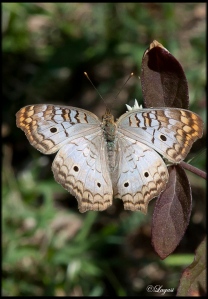 This bike ride also got me the best information on birds of the whole trip..I was asking the caretaker about local birds, he suggested I talk to Carlos a local Tour Company Rep.  I managed to contact Carlos but told me that he was not able to take me out birding but that he’d be more than happy to give me directions to some of the best local birding areas…I jumped at the chance.

So next morning I was up early map in hand, got on my rusty bike…opps trusty bike, off I went looking for a village 3 miles up the road.  I was glad I had the wind at my back, I realized I made a great sail…LOL…it took a while but I made it to the village, as I walked through the village a few people were watching me, one person stopped me..he spoke a bit of english and I showed him my map.  He took me to the trail I was looking for.

As soon as I stepped on to the trail, birds were everywhere, I climbed higher and higher up the mountainside, then I heard it.  The unmistakable call of a Trogan…a beauty, this Cuban Trogan, never really came out in the open..

Moving further up I saw a La Sagra’s Flycatcher,  Loggerhead Kingbird, Cuban Pewee and a Cuban Emerald.  Lacking a bird book of Cuba, I can only guess at some of the others.

I had spent 3 hours in this lovely forest, heard many calls and saw lots of beauties, so I decided it was time to turn back.  I had just about reached the village when a small bird caught my eye, inching closer, still not knowing what it was, I was amazed at the colors…the Cuban Tody.

Photography under the canopy of a forest can be brutal but most days there’s always one keeper image and the Tody was it…Ciao for now.