I wanted to take a break from the brutal winter we were having in Ottawa, I figured a few days searching for rarities would certainly be in order.

My friend Gilbert Bouchard was in California and I chose to meet up with him before going to Texas. I had 3 days and 2 rarities to try and see while there.

Gilbert picked me up at the airport and we headed straight out to Loews Coronado Bay Resort, where the Nazca Booby was being seen.  It really didn’t take long once we got there to spot the bird but it was way out on the bay and getting a photo was out of the question.

The photo below shows my futile attempts to digi-scope and image.

We decided to splurge on renting a boat from Action Sport Rentals ( who obviously knew they had a good thing going) at the rate of $140 US Dollars for an hour.  Off we went.

Along the way there were hundreds of Surf Scoters on the water. 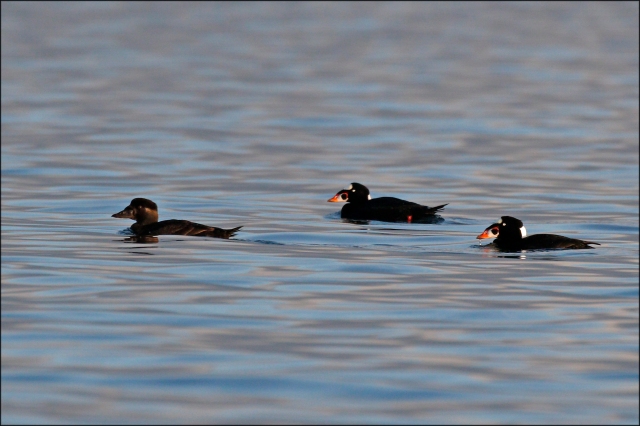 It took a few minutes to arrive at the buoy and to our dismay the booby was nowhere to be seen, the wind then shifted and the buoy began to move and we saw the bird on the back side of it.  Not knowing how long the bird would stay as we got closer, we both started taking photos.

We needn’t have worried though, this bird wasn’t going anywhere.  I t must have been use to boats and people.  We go so close I couldn’t get the whole bird in my 600mm frame.

This was my 725th ABA bird – Nazca Booby

We drove the boat back to the marina and called it a night.

Next morning we went looking for the Red-throated Pipit that had been frequenting a school soccer field but school was having recess and the pipit group was in deeper grass at the far end of the field, because of the fence we could get no nearer.

We drove to another spot trying for year birds determined to come back later.  When we arrived back, recess was over and of course the groundskeeper was cutting the grass in the field.  While Gilbert talked to his girlfriend I decided to walk over to the park near the field, to check it out and there it was the Red-throated Pipit with a group of American Pipits.

This was my 726th ABA bird – Red-throated Pipit

Gilbert was going north to try and get his lifer White Wagtail and I had time to kill before my flight to Texas, so I joined him to see the bird for the year and hopefully get a better photo.

We waited at the spot where the Wagtail was coming to and just when we thought it was going to be a no show, it arrived and put on a great show for everyone.

I move on to Texas the next morning, while I saw many great birds but the Tamaulipas Crow and Hook-billed Kite were a no show for me.