Today, a friend and I, left early and drove down to Cornwall to find a reported Glossy Ibis.

We turned into Guindon Park across from Richmond Drive to get my bino’s and camera gear ready. Here we met Dawn, whose husband had found the Ibis. She was nice enough to take us in.  We drove north on Richmond Drive and parked near an old rail line on the left, just after a hill and before the train tracks (less than a kilometre).  She’d just been there but was unable to see the Ibis. As we walked the old rail line, we saw, Moorhens with young, Spotted Sandpipers, Kildeer, Night Herons and a Common Tern.

This was a new marsh,  a lovely place to watch birds, high, on the abandoned rail line, a great place for scoping and photographing. 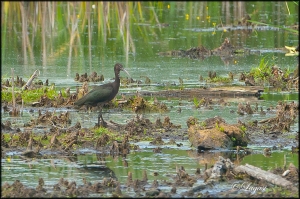 As we walked along, we hoped, the bird had returned to the area. We weren’t dissapointed, the Ibis was feeding about 200 yards out at edge of the marsh.

As we were leaving a group of birders from Ottawa was just arriving…we spent the rest of our time driving and birding..I probably looked at a few hundred sparrows, mostly Savannah’s, Song, Vesper’s, Swamp’s.  Finding this Leconte’s was a big surprise.

Thanks Bob for finding the Ibis.   Dawn, thank you, for your help…