April 22, 2007, was the day I saw my first Yellow-breasted Chat in Concan, Texas at Neil’s Lodge.

Since that time I’ve seen at least 10 or more but I’ve never been able to get a Chat photo of any kind.

I’ve seen photos people have taken where they are out in the open, singing away. This species became my grail bird: one that I thought I’d never photograph.

Rick and I pulled into the parking lot of the Boyce Thompson Arboretum State Park in Superior, Arizona. We decided to stop here on our search for Gray Vireo’s. The moment I stepped out of the car, I realized the nearby shrubs were alive with Chat’s doing what they do best……chatting.

I pulled out my call and played it once and a lovely male flew from the underbrush and just started singing away. I didn’t even extend my lens, I just fired away, for fear the Chat would disappear, like they had so many times before. To my surprise it just kept singing, singing, singing…….

Feeling braver I moved a bit closer then remembered I had my Tamron 150-600 zoom, this Chat stayed there for a few more seconds allowing me a perfect broadside pose. Then flew back down into the shrubs, disappearing.

Many of you, who’ve birded with me know how hard I’ve tried for this bird……priceless when they oblige. 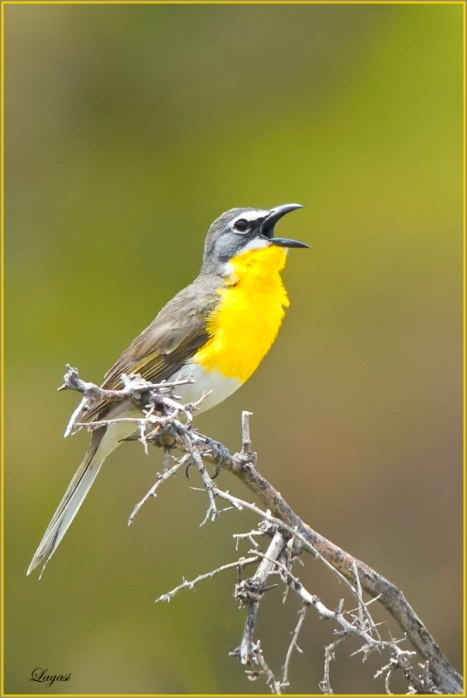