I dragged Rick up that canyon for at least 2 miles looking for the mystical dam, I’d heard about, only to realize when I was up there that the Robinson Springs trail was the wrong one.  Sweaty and thirsty and on rubbery legs, we climbed back down to the car, knowing that I was never going to go up the right trail that day.

A bust for the warbler but we were surprised to find another life bird, the Black-Capped Gnatcatcher.  It was causing a ruckus as we went through the nesting area. 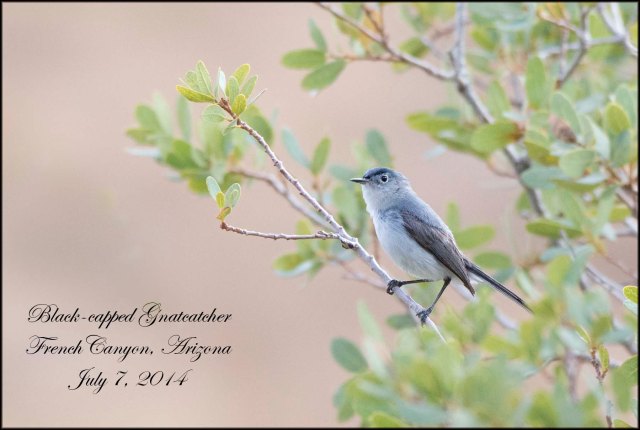 On the same trail we saw many Canyon Towhees… 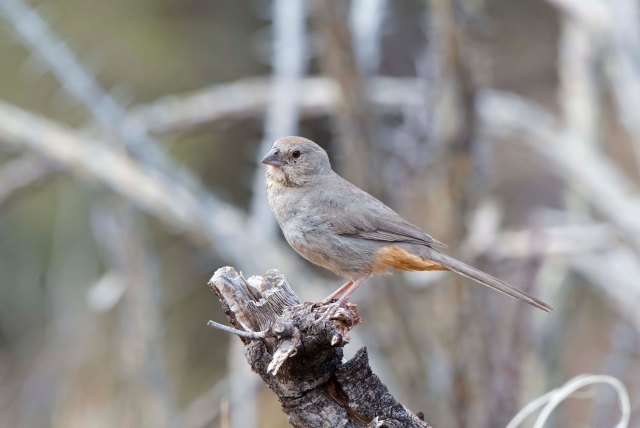 I guess I’ll have to try again someday but I will have to remember, after the gate go to the right and take the trail behind the research station but for this day it was time to move on.

Rick and I headed to Patagonia, Arizona, to search for a Thick-billed Kingbird that had been seen in the area.

We drove the 35 miles and arrived at the Patagonia Rest (Blue Heaven – Google Map) Stop along Hwy. 83 south of Patagonia.  It wasn’t hard to find the rest area but by the time we got there we could tell it wouldn’t be very smart to roam far from the car.  Rain clouds were everywhere and a downpour was on the way.  Luckily the Thick-billed Kingbird wasn’t afraid of a little rain and it popped up on a branch giving us great views.  The bill is massive, once you see a Thick-billed Kingbird, there is no mistaking it.  Not the best photo but I would have another opportunity later in this trip.

Melody had suggested we contact Tony Battiste in Hereford, Arizona.  He knew a location where Montezuma Quail were coming to feeders.  I needed a photo and Rick needed the Quail for his life list.  We called Tony and he met us on the road and took us to the feeders, where we spent the next 3 hours waiting and hoping for the Quail but as birding goes “we were there but the birds weren’t”.

Leaving here we checked into Beatty’s Guest Ranch and settled in for the night.