We arrived at Beatty’s Guest Ranch late in the day and were greeted by Tom Beatty Jr., and shown to our cabin.

I thought their dogs would make noise every time we walked in or out but it was not the dogs that were the noisy ones.

Our home for the next 2 days was a spacious 1 bedroom cabin, with at least 1,000 square feet of living area, lots of beds, full kitchen, full bath, dining room and living room.  I think it could easily have slept 6 people and all for only 100$ a night.  This included a guided walk up the canyon to look for Spotted Owl.

We settled in very quickly, stowing our gear, and headed back to Sierra Vista to buy supplies and go back to the feeders to look for Montezuma Quail.  Tony Battiste met us and put out feed.  All we could do is wait. We spent 2 hours waiting and though we heard Montezuma Quail calling none came in.

That does not mean that nothing came in.  There was a constant flow of Canyon Towhee, Pyrrhuloxia, Gambel’s Quail, White-winged Dove, Ground-Dove, Rufous-capped Sparrow and deer.  As it got later in the evening we decided to call it a day.  We would come back in the morning and try again; we wouldn’t be going for the Spotted Owl until 8 am.

We had a lovely supper of beans and weiners, which would come back to haunt us the next day, a bottle of wine care of Rick to wash it down and then we both were out cold.

Sunrise was spectacular that morning.

We were back at the feeders by 5 am, and we watched a steady stream of birds come in to the feeders but no Montezuma’s.

At 7:30 am, we returned to Beatty’s to meet up with Tom Beatty SR, who would take us up the canyon for Spotted Owl.

Tom is 76 years old and had just a few days before had surgery on his back to remove a cyst.  We figured it might slow him down a bit, but if it did I sure didn’t notice.  Thank god for all the walking I’d been doing.  We hiked uphill on a decent trail for an hour, then the trees became alive with birds – a lovely Western Tanager, Hepatic Tanager, Humingbirds, Flycatchers and Bushtits.

Thirty minutes more brought us to an area that Tom mentioned should hold Red-faced Warblers and until recently the Spotted Owls.  A little further ahead, we spotted a family of Spotted Owls just sitting by the trail.  They couldn’t have cared less we were there, all they wanted to do was sleep. 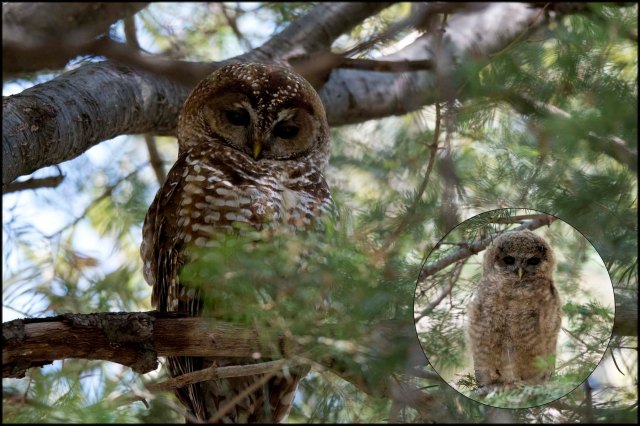 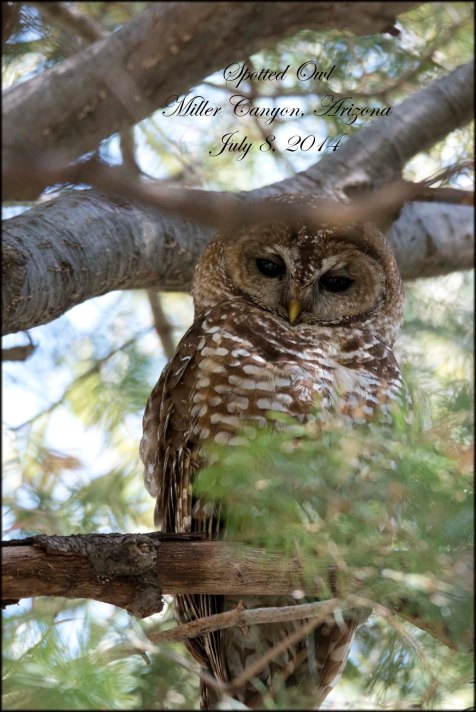 Tom Sr, Rick and Dave continued up the hill but my eye had caught sight of another lifer I needed. I had searched for this bird in the Cave Creek, Arizona many times. I had heard but never seen a Red-faced Warbler…..

Tom Sr. decided to head back down. For the most part the rest of the climb up was spent birding with binoculars but I did manage to find a lovely Broad-tailed Hummingbird feeding on flowers, an improvement on my previous image. Rick found a lovely Cinnamon Bear but it did not give either of us an opportunity for an image. Cool none the less. 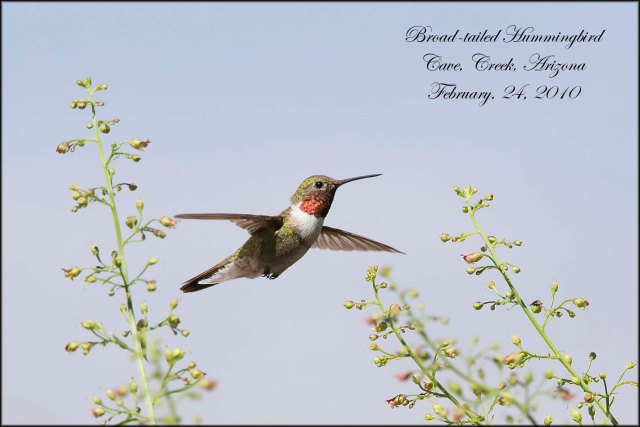 At 2 o’clock Rick and I decided to turn around, get back down the canyon. It was time to go back to the ground feeders, to try and to get a Montezuma Quail. On the way down we ran into a flock of Bushtits. I noticed one of them had a bit of yellow as it flew away, and the chase was on. This bird flitted from branch to branch, never stopping for long. I soon realized I had my last ABA Warbler in my sights, my grail warbler, the Virginia’s. It really never gave me a good chance for a photo but I did manage to get a few but the bird was hidden by foliage. The 2 images below on the left show the yellow coverts and the yellow patch on the breast. The 3rd image is my sharpest, and would have been a keeper but his head was hidden behind a leaf. I re-created the head for this thread. I will run into this bird again.

A crappy photo is better than no photo at all…

I want to thank Tom Beatty Sr and Jr, they were wonderful hosts.   They have had a lot of hardships recently and could use the business.

They have suffered through floods, fires and drought but its the only place to reliably see Spotted Owls.  If you click on this photo you can see the effects of the fire, started by either a smuggler or illegal trying to stay warm in the mountains.

They have replanted flowers and there was color everywhere.

We didn’t have much time to visit the nectar feeders but there were Hummingbirds galore.

It’s also one of the places where you can see the Chiricahua Leopard Frog in the pond by the entrance.

Now on to the Quail….